Children with autism have not benefited from experimental therapy with a hormone believed to promote social bonds, researchers in the largest study of its kind reported on Wednesday.

â€œThis is really a major setback,â€ said Dr. Linmarie Sikich, a researcher at Duke University who led the US multi-site study published in the New England Journal of Medicine. “We were really hoping to find an advantage and we just couldn’t see it anywhere.”

The US government-funded study used a synthetic form of oxytocin, a hormone made in the brain that stimulates the uterus to contract and helps mothers bond with their newborns.

Experiments in mice have suggested the hormone may promote sociability, and small studies have suggested that it may have similar effects in children with autism, who often have difficulty interacting socially.

Almost 300 autistic children initially enrolled, and 250 of them completed the six-month study. The children, aged 3 to 17, received daily squirts of nasal spray containing oxytocin or an inactive ingredient for seven weeks, with gradual increases in dose thereafter. The dose can be maintained or reduced on request.

Small improvements in behavior occurred in both groups, but they had no significant impact, Vikich said. Separate analyzes showed no difference in results in children with mild or severe autism, she said.

One patient in the oxytocin group had a serious side effect thought to be caused by the hormone – sedation while driving which led to a car accident. Otherwise, there were no major safety concerns in the hormone and placebo groups.

According to the Centers for Disease Control and Prevention, about 1 in 54 American children have autism. Behavioral therapy is the most effective treatment.

Oxytocin is a natural hormone and a chemical messenger. It is best known for its role in inducing labor and releasing breast milk in women. Synthetic oxytocin is sometimes given to pregnant women intravenously to induce labor.

Based on the initial research results, some doctors have started prescribing it for children with autism. Some promoters call it â€œthe love hormoneâ€ and it is sold online as potions and pills to boost mood and relationships.

Larry Young, a scientist at Emory University who does animal research with oxytocin, said it was too early to give it up to treat autism. He said the hormone is better understood today than when the study began nearly eight years ago.

â€œIt makes the social world around us more alive in our brains, so we pay attention to it,â€ Young said.

He compared the potential effect in people with autism to removing frost from a windshield that prevents them from reading social cues and emotions.

Without behavior therapy or accompanying counseling, however, this effect could be negative, he said. He cited a hypothetical example in which a child with autism receives a squirt of oxytocin every morning and begins to pay more attention to other children on the school bus. What if the increased attention helped the child realize that children are mean and intimidating?

â€œThis is a very important study because it says that giving oxytocin daily over time is not going to lead to improvement,â€ Young said. â€œI hope doctors and parents learn from this and say it’s not something we give as a vitaminâ€ without further treatment.

Joyce Galaverna’s son was 13 when he enrolled in the study in 2015. He tolerated the treatments but his behavior showed no improvement.

â€œThe levels of irritability and anxiety remained about the same throughout the study,â€ she said.

The North Carolina family never knew whether he had received oxytocin or the placebo.

Although the results of the study were disappointing, Galaverna said her son, Andre, improved after the puberty pains eased and he enrolled in a stimulating private school. He graduated from high school in June and now has a part-time job.

University of Virginia autism researcher Kevin Pelphrey said other studies have shown that administration of oxytocin through the nose can lead to changes in regions of the brain involved in social behavior. He said the study’s use of a behavioral checklist to assess the hormone’s effectiveness may have limited its results.

Brain-based measurements could be useful in determining which children might respond best to the hormone, he said.

â€œThere is still a lot of work to be done to understand how oxytocin could be used to improve social function in children with autism,â€ Pelphrey said.

The Associated Press’s Department of Health and Science receives support from the Department of Science Education at Howard Hughes Medical Institute. The AP is solely responsible for all content.

FILE – In this archive photo from Saturday April 2, 2011, pedestrians walk past drawings of children with autism after an event in Bucharest, Romania, to mark World Autism Awareness Day. According to an American study published in the New England Journal of Medicine on Wednesday, October 13, 2021, children with autism have not benefited from experimental therapy using the hormone oxytocin, which is supposed to promote social bonding. (AP Photo / Vadim Ghirda) 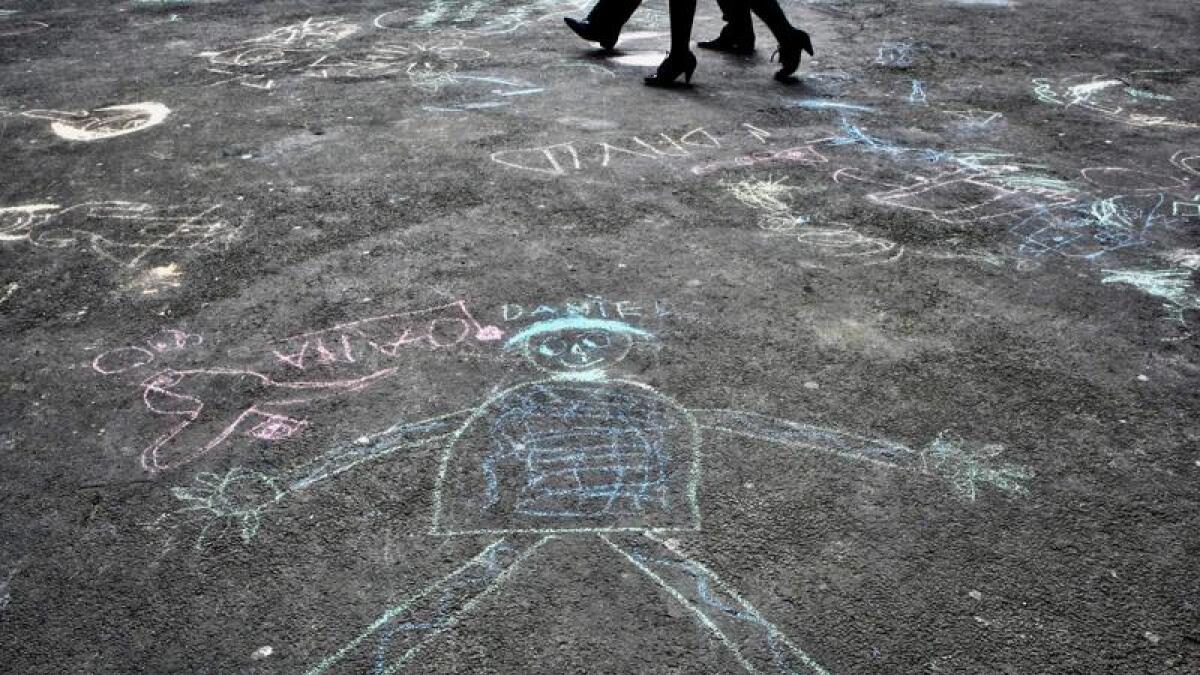