While in high school, Ethan Ertel ’22, College of Engineering and Applied Sciences, attended a summer program led by Srinivas Pentyala, professor and director of translational research at the Renaissance School of Medicine at Stony University. Brook. Sponsored by the Department of Anesthesiology, the summer program, known as SARAS – Science and Research Awareness Series – introduces high school students to a variety of healthcare workers and researchers who discuss their work.

The experience turned out to be transformational.

“They told us about what they do, just to expose us to the different areas that the health sciences have to offer,” Ertel said. “I have heard lectures from so many different experts who specialize in different parts of the body, and all of them have interested me.”

After hearing a talk by Peter Brink, professor emeritus in the Department of Physiology and Biophysics, on the use of stem cells to develop biological pacemakers, Ertel became hooked. He quickly joined Brink’s lab, and has been doing research in that department ever since.

He became involved in the University Scholars program during his first semester after Jeremy Marchese, his University Scholars advisor and professor in his class SCH 101 Introduction to Stony Brook, encouraged him to join one of the committees led by students of the program. Ertel has joined the Academic Committee and the Council of Scholars, a student body that discusses things that students want to see added or changed in the program.

“I have been involved in the creation of the College Fellowship Aid Review program, a campus-wide food drive, the development of mini-council committee focus groups, and ‘other amazing additions to the scholarship program,’ he said.

He then became a scholar and had the chance to attend the SCH 101 class and mentor freshmen, guiding them through their new university experience. 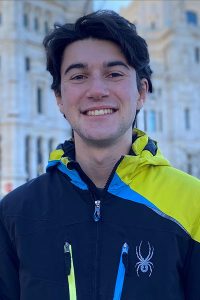 “Coaching a group of freshmen has been an incredible experience,” he said. “My cohort of fellows were close and I was able to make a diverse group of friends spanning all fields and interests. Becoming a scholar was my first leadership experience, which gave me access to other leadership opportunities on campus.

Ertel is currently working in the laboratory of Professor Irene Solomon in the Department of Physiology and Biophysics, studying the mechanisms underlying the role of the central nervous system in respiratory physiology.

Ertel said Solomon, Marchese and Hassan Arbab, assistant professor of biomedical engineering and his current BME principal thesis supervisor, have been his mentors.

“Ethan has stood out since I first met him in his freshman year,” Marchese said. “When you’ve worked in higher education for as long as I have, you can see a spark in some students, even when you first meet them. He definitely had that spark, and from that point on I knew he was going to be a very special addition to our program. He really just wants to help his peers. He’s done amazing things here before, and while I really hate the idea of ​​him leaving, I can’t wait to see the amazing things he’s going to accomplish after he graduates.

After graduation, Ertel hopes to apply for a medical science training program and pursue a doctorate in medicine, with the ambition of becoming a physician-researcher and working to improve patient care. Until then, he’s just helping his classmates and offering wise advice to those new to Stony Brook: “Try to get as involved as possible on campus while making sure you prioritize your schoolwork. Work on your time management skills from the start and make sure you are on top of your job and commitments.