Interestingly, Johan Andersson from DICE posted a tweet with the text “Dat feeling when your just arrived closed liquid cooling pre-release GPU turns out not to be so closed after all “and a photo of coolant leak. Now that leak information is not so relevant, but the fact that it mentions a pre-release card that obviously has liquid cooling, does.

Johan Andersson from DICE always (guys from WCCFtech noticed Johan Andersson post this tweet) has been close to AMD and has actually shown up at several AMD press events in the past. It has long been speculated that AMD will release a Fiji XT dual GPU graphics card. In fact they already mentioned it and even showed it, its code name is called GEMINI. From this point on, things will become speculative as we can only speculate that the card must be GEMINI: 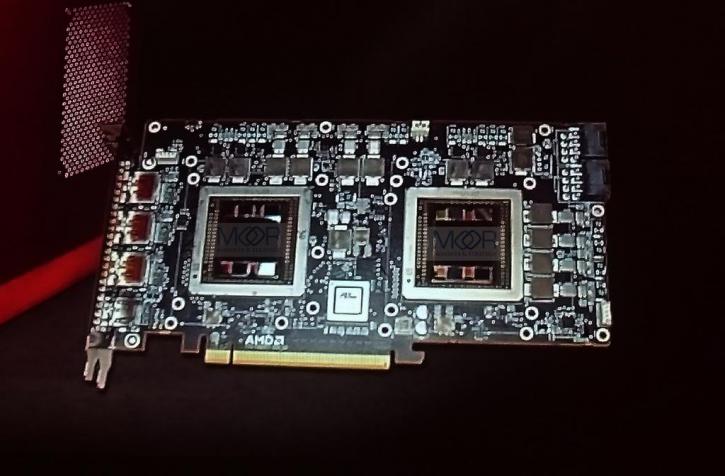 It has already been mentioned that the release of the Dual Fiji XT graphics card will still be on track for this year. In fact, it was caught being dispatched as it showed up to an India-based courier. The code name that has been spotted is “Fiji Gemini”, and we have to mention here that “Gemini” has already been used by AMD to denote a dual GPU product.

The country of origin was Canada, yeah the base of AMD’s Radeon group. The previous photos however show two 8 pin PCI Express power connectors and therefore an allocation of up to 375 Watt (which honestly isn’t bad).

These small pieces of information indicate that a launch could be imminent. Now the Fury X hits 8.6 TFLOPS of performance, meaning that a dual GPU version would deliver over 16 TFLOPs of single precision performance. And yes, a dual GPU Fiji would have 8GB of HBM1 graphics memory with a whopping 8192 stream processors.

If all of this is to be true, it will be interesting how AMD treats Crossfire. In the past both chips were internal bridges with a PLX switch chip, we would expect something similar (update looking at the photo, you can see the PLX chip). With AMD’s new XDMA Crossfire, it could actually run through the lanes created by the PLX on an internal PCI-Express bus.

The PCB photos are old however, these are the first engineering prototypes / samples from last summer. We expect a change or two from okay. However. such a card would give a massive proverbial azzz kick. To be announced in December? We will see and we hope so.

Radeon R9 Dual GPU Fury PCB photo – 06/17/2015 09:00
So on the Quantum project that we talked about yesterday. A photo appeared of the PCB, it is actually a Fury Dual GPU graphics card ….

GeForce Titan Z has 12 GB graphics memory and two GPUs – 03/25/2014 19:28
At GTC in the United States, Jen Hsun Huang (CEO of NVIDIA) unveiled a new addition to the Titan line, the GeForce GTX TITAN Z. This graphics card comes with 12 GB of graphics memory. It is a d …