Dist. 15 Supt. Laurie Heinz speaks to the media on September 21 in a special announcement that Sundling Jr. High has been named the 2021 National Blue Ribbon School. (Newspaper photo)

Recognition is based on a school’s overall academic performance or on progress made in reducing achievement gaps among subgroups of students.

Cardona made the announcement when returning to school while visiting Sundling Jr. High School in the Palatine. 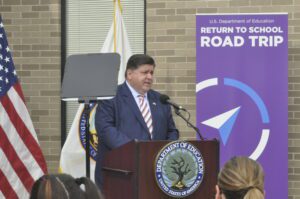 “Our staff are committed to our students and we are now celebrating the fruits of their labor,” said Dist. 15 Supt. Laurie Heinz said at a press conference outside Sundling on Tuesday, September 21.

Governor JB Pritzker, who was also present at the press conference, said he was able to tour the school and visit the students, noting that it was great to participate in the group’s rehearsals and science lessons.

He gave Sundling credit for having a diverse culture and for eroding the racial achievement gap.

A proud director of Sundling, Jason Dietz, noted that the school and the district continue to challenge and inspire all students to achieve academic excellence. He added that without everyone working as a team, the school would not have the success it has without commitment, dedication and confidence.

“This year’s cohort of laureates demonstrate what is possible when engaged educators and school leaders create vibrant, welcoming and empowering school cultures where rich teaching and learning can flourish,” Cardona said. “I congratulate all of our Blue Ribbon recipients for working to keep students healthy and safe while meeting their academic, social, emotional and mental health needs. In the face of unprecedented circumstances, you have found creative ways to involve, care for, protect and teach our children.

“Blue Ribbon Schools have so much to offer and can serve as a model for other schools and communities so that we can truly build back better. “

Cardona called on all students to encourage help when needed, find ways to explore their identities and help keep Sundling and all schools safe by continuing to wear face masks and get vaccinated if they are over 12 years old.

Now in its 39th year, the National Blue Ribbon Schools Program has awarded approximately 10,000 awards to over 9,000 schools.

The department recognizes all schools in one of two performance categories, based on all student scores, subgroup scores, and graduation rates:

Up to 420 schools can be nominated each year.

Support local news by subscribing to Journal & Topics in print or online.